A run-of-the-river installation in the upper stretch of Tungufljót has been under development for the last few years in collaboration with Mannvit Engineering. The power plant will have an installed capacity of 9.9 MW. Preparation measures continued in 2017 and a number of important phases were completed. All conditions have been met and construction is expected to begin in 2018.

Five tenders were released during the year for construction, construction supervision, machinery procurement, penstock and gates, and steel construction. Tender documents were made accessible electronically for the first time. Negotiations with the various bidders began at the end of the year.

The National Energy Authority issued HS Orka with a power development licence for the construction and operation of a power plant. A contract was signed with RARIK in October. The power plant will be connected to the substation at the distribution utility in Reykholt with a 33 kW electricity cable which will become part of RARIK‘s distribution system in the area.

Research projects fulfilled the conditions outlined by the National Planning Agency in the Environmental Impact Assessment (EIA) for the Brúar Power Plant. An agreement was reached with the Icelandic Institute of Natural History to conduct research on Harlequin duck nesting areas in Tungufljót and benthic vegetation and flora at the reservoir site for the Brúar Power Plant. An agreement was also reached with the Icelandic Forest Service for the re-forestation of birch forests in a lupine covered area (10 hectares), above the Haukadalur Valley. The reclamation of wetland areas in Mosfell in Grímsnes was also part of the agreement.

The dams by Sandvatn were assessed after flood risk assessments had been conducted and proved satisfactory.

Planning changes were completed for the Brúar Power Plant early this year when the Bláskógabyggð Municipality confirmed amendments to the Master Plan and a specialised land-use plan for the power plant‘s structures including the powerhouse, dam and wall and a specialised land-use plan for material extraction and spoil areas. The Fisheries Authority granted permission to implement these conditions. The Directorate of Fisheries issued a licence for construction with certain conditions.

The Bláskógabyggð Municipality advertised the development licence at the end of October. One appeal was made by the kayaking club in Reykjavík and another combined appeal was made by the nature conservation association of South Iceland and the Icelandic Environment Association. These appeals were challenged and a request was submitted for their dismissal or rejection. Construction is expected to begin once a decision has been made on the validity of the development licence.

An application was submitted for a new utilisation licence for the geothermal area in Svartsengi-Eldvörp as well as an application for alterations to the power development licence for the power plant by Svartsengi. Model calculations carried out by the engineering company Vatnsskil on utilisation and re-injection measures for the next 30 years and the effects of drawdown on the water levels in Svartsengi and Eldvörp were submitted as the basis for these changes.

The National Energy Authority received comments on the licencing and made any relevant changes in accordance with these comments. A new utilisation licence was issued for the joined geothermal area in Svartsengi and Eldvörp and a power development licence for a 75 MW power plant in Svartsengi. The initial licence only gave approval for the production of 560 GWh per year.

Geothermal energy must be utilised carefully within the area and the development of utilisation in Svartsengi must also be monitored. The steam pillow in the upper layers of the geothermal system must be especially monitored.

Preparation measures were carried out in Eldvörp this year including the reinforcement of roads and the construction of a drilling platform for exploratory drilling in the area next year. The research will explore the best methods for steam production from wells in the westernmost area of the area.

HS Orka commissioned ÍSOR to conduct an assessment on the potential for utilising freshwater in the area to the east of the Grindavík Road and to the south of the Reykjanes Road as a reserve water resource for freshwater utilisation. The water supply in such an area would not be in the area susceptible to potential contamination, due to serious contamination accidents e.g. if dangerous liquids seep into the soil and into the soil layer. The next step is to find an appropriate location for utilisation and a drilling location for an exploration hole.

Construction on the low-pressure, 30 MW power plant (REY-4), designed to improve utilisation at the Reykjanes Power Plant, was delayed until 2016 as a result of diminished steam production in the area. Efforts have been made to restore steam production and to achieve full capacity so that work on the power plant can continue. The current power plant was close to full capacity by the end of the year and preparation work on REY-4 will therefore continue in 2018.

Changes were made to planned pipeline routes and drilling platforms for proposed production drilling in the next few years. An assessment plan for the treatment of active waste was approved by the Planning Agency. An interim report is underway, but uncertainty with regard to final disposal methods has delayed progress. 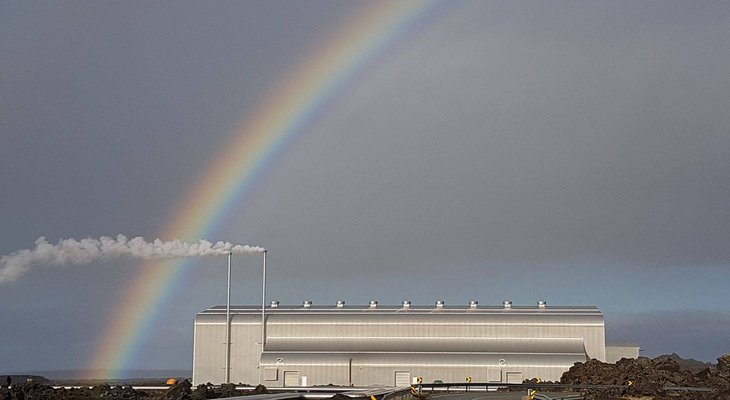 The proposed geothermal area at Stóra-Sandvík is located in the geothermal area in Reykjanes, and is in the utilisation category of the Master Plan for Hydro and Geothermal Energy Resources in Iceland. Research in the area (mainly resistance measurements) has been carried out in conjunction with surface research, in connection with geothermal utilisation in the Reykjanes area and in Eldvörp-Svartsengi. Some expert knowledge has therefore been acquired on the area and the next step is exploratory drilling.

Research data was gathered this year and ISOR was asked to present a comprehensive overview of the potential for geothermal utilisation in the area as well as a location for the first exploratory well. HS Orka must also decide if and how an exploratory well should be drilled in the area. HS Orka already has a research permit and an agreement with the landowner for research and utilisation in the area and can therefore go ahead with any plans.

An application was submitted to Grindavík's Planning Committee to construct an 80 meter research mast in Staðar in Reykjanes and / or in the area near Stapafell. The Planning Committee rejected the request on the basis that a policy for the utilisation of wind for electricity production has not been developed for the Grindavík area. The policy is currently being developed as part of the review of the Master Plan for the region. Wind energy utilisation and the possible location for measurements and possible development will be considered. A proposal for a new Master Plan is expected to be announced in the spring of 2018.

VesturVerk continued preparation work on the proposed Hvalár Power Plant in Árneshreppur which is one of the few hydropower projects categorised as suitable for utilisation by the current Master Plan for Hydro and Geothermal Energy Resources in Iceland. The National Planning Agency‘s assessment of the EIA for the Hvalár Power Plant was published at the beginning of the year and will be used as a guide for any further preparation work for the power plant.

Changes were made to the Master Plan and a proposal was submitted for a new land-use plan to ensure that necessary studies could be conducted on the proposed dam site and the construction of service roads etc. The plans have been put forward for the approval of the municipality, and will then need the approval of the Planning Agency which can be expected in 2018.

Work continued on the preparation of connections to Landsnet's transmission system, including cable routes and connection points. This connection represents the beginning of the further expansion of the West Fjords transmission and distribution system, which could contribute to the increased use of hydropower, increased security of supply, improved power supply and employment opportunities.